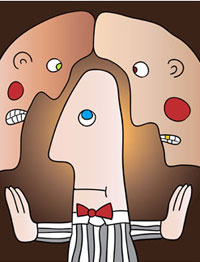 I got a call that we’re scheduled for the “The Mediation”  In less than a month, we’ll meet at the EEOC and perhaps conclude this part of my life.

Some background:  I was gainfully employed until suddenly one morning about 8 o’clock I was called into my boss’s boss’s office (an event that rarely, if ever, happened before that).  I was handed an envelopment of papers and a cover letter. It was like being in a car crash.  Time slowed down, my heart raced, as events very slowly unfolded before me.  The cover letter informed me that I was in a “layoff” and they made me an offer of a couple months pay… if I didn’t sue them.  (They knew there were skirting the law).  I read the letter and my supervisor sat while I loaded the contents of my desk accumulated over the  last five years into a few boxes (he had brought them with him) .

It was hardly a “layoff”.  There were about half a dozen people on the second shift from the manufacturing plant in the “layoff”.  That was pretty typical for that time of year.  In the winter, they were usually laid off for the slower part of the year and brought back in the spring when things pick up.  But, more importantly, there were three or four others included this time.  I was one of those selected along with another older person with some medical issues.  The third person was a younger woman but she had had some medical issues in the last year, also.  I wrote about this in “Dialysis and ADA”  and in “Dialysis and Your Job (Part 2)”

It’s extremely important to be prepared for the mediation.  It may be the only chance you have to present your case and get what you want and need from the employer.

I gathered all my documents together.  I had done a careful analysis of the ages and status of the people involved in the layoff paying particular attention to their ages, medical conditions, and positions. This data supported my charges against the employer.  I reviewed all this material and made sure it was in a place where I could retrieve it when I went to the mediation.  I had a month to review and consider all this and I spent several hours over the next 30 days doing that.

One site I accessed was this from the EEOC about mediation Questions and Answers.  I made sure I had all my ducks lined up and was prepared as well as I could be.

The charges I made were: Violation of the Americans With Disabilities Act (ADA), Age Discrimination (ADEA). Denial of Benefits, and Retaliation.

The fact is the company terminated me because of my age and medical problems.  I worked very hard to avoid letting my kidney failure adversely effect my my work. I went in early every day and often worked weekends and evenings to compensate for the three days per week I left early for dialysis.  I had worked through many of the issues that interfered with my work like digestive problems and insomnia.  I hadn’t taken off many sick days in the last year.  I was quickly approaching my fifth year with the company and never had a bad review.  I was a good employee… except for kidney failure.  I was also the oldest person in the department and was not the last person hired.

But now, after over a year (see my previous posting “Dialysis and EEOC“) , my former employer (their representative anyway) and I will meet to work out a resolution.

Anyway, we’ll see what transpires.  I will write about it in another posting. For more about my experience with the EEOC and Mediation, READ Dialysis and Mediation Update.

I am a person with ESRD (End Stage Renal Disease) which means my kidneys don't work. Forty or so years ago that would have been a death sentence but today there is Dialysis which means I can be hooked up to a machine that will clean my blood as the kidneys should. Three days a week, I go to a center and have too very large needles stuck in my arm to remove and replace my blood as it passes through a process where it's cleaned and the fluid is removed, a process taking a little over four hours each time. I want to advance knowledge about dialysis so that other patients can learn from my experience and mistakes. We shouldn't have to reinvent the wheel, eh? There is so much to be learned and experienced about our predicament. There are vast resources available to support us and enrich our lives but many patients don't know about them. There are also many issues that we have to deal with whether we want to or not. So I blog about them. All comments are confidential until I approve them. If you don't want your comment public, let me know and I will respect that. So, feel free to leave a comment. Enjoy.
View all posts by DevonTexas →
This entry was posted in ADA, ADEA. Bookmark the permalink.

3 Responses to Dialysis and EEOC Mediation